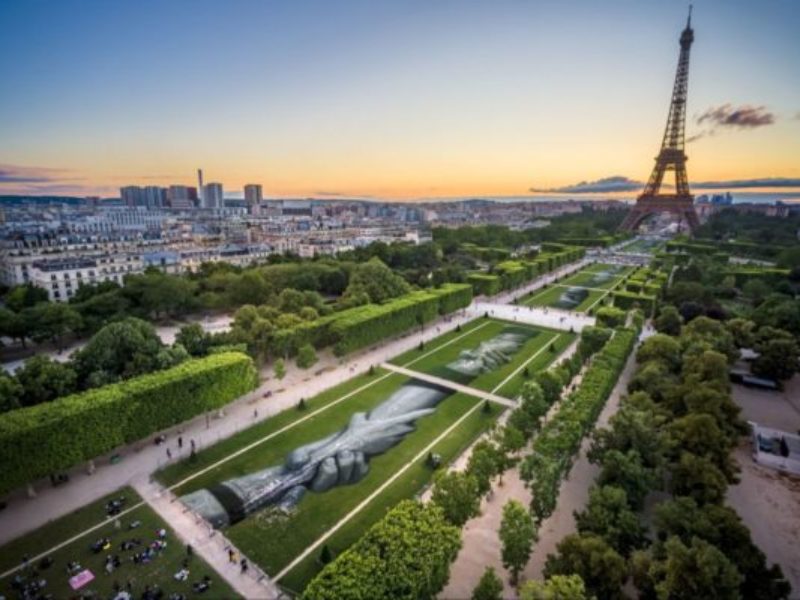 Under the Eiffel Tower, a huge but mysterious picture of hands connected with each other forming a chain has recently appeared on Champs de Mars.

The author of this touching gesture is the French artist known as SAYPE.
With this action, he wanted to support the SOS Méditerranée organization,
which since 2015 has been saving the lives of people crossing the sea at the world’s deadly migration route.

The name of SAYPE’s oeuvre is ‘Beyond Walls’, it measures approximately 15,000 m2 and is made of 100% biodegradable paint based on natural pigments (chalk and charcoal).

The spectacle is (as in the case of most street art) only temporary. With the regrowth of the grass and weather conditions, it will disappear over time. Hurry up if you do not want to miss it! The best view of this chain of human hands is of course from the top of the Eiffel Tower.

‘Beyond Walls’ starts in Paris but it will not end here. SAYPE plans to travel around the world for the next 3 years to continue this message.

This is not the first time, however, when the Eiffel Tower allows artists to intervene on the larger scale. In 2015, during the COP 21 with the support of la Mairie de Paris, the world-famous artist Shepard Fairey (better known as Obey) attached a huge sphere between first and second floors of the tower. It was supposed to reflect ‘Earth Crisis’ and it was named after that. Between decorative flowers of this 8-meter “ornament” hanging from the tower like a Christmas ball (it was December 11th), it unveiled the scenes symbolizing the dangers of, among others, global warming and increase of air pollution.

The project was carried out with the initiative of Gallery Itinerrace – one of the most influential galleries promoting urban art.

And just a year later, during Nuit Blanche, another American artist – Cleon Peterson – was allowed a giant playfield under the Eiffel Tower, decorating it with huge 500m2 mural: ‘Endless Sleep’.
The white and black dancing figures represented the scene taken from the Italian novel Hypnerotomachia Poliphili – the leading subject for Nuit Blanche 2016. Cleon Peterson used it as a pretext to raise the subject of our modern dilemma of division and the search for social and political union. In the modern, global society, the differences are either bringing us together or forcing us further apart.

Have a look below at the pictures of each of these massive projects and let us know in the comments which had the biggest impact on you. Which one did you enjoy most?

The wind of revolt blows on the walls…so strongly that they are wearing a red scarf.
RNST is the contrary of being an isolated painter rally all the votes in France, the French being naturally revolted.

After all it is the country that has invented  the communism, at Tours in 1920 as everybody knows. The famous “L’Internationale”song had his lyrics written by a Frenchman…

The wind of revolt blows on the walls…so strongly that they are wearing a red scarf.
RNST is the contrary of being an isolated painter rally all the votes in France, the French being naturally revolted.

After all, it is the country that has invented the communism, in Tours in 1920 as everybody knows. The famous “L’Internationale” song had his lyrics written by a Frenchman…

The colour he shows is one of the rivers of blood that has spread down the hills of Belleville in May 1871 during the “bloody week”, of the Spree river carrying Karl Liebknecht and Rosa Luxemburg’s corpses, of the eponymous army of Leon Trotsky.

The red: half of the colours of the city of Paris with the blue, that has encircled the white of the royalty to make the French flag. It paradoxically reminds us of the “Oriflamme” that the kings hold at Saint-Denis when he raised troops for war.

This enlightens suburban guerilla, this sun daze that slides to the east is the distinctive signature of RNST.
Tenderness of the embrace. Embrace of the tenderness between favour and fear, curled up in the arms of a grizzly, in the space between the mouth and the scarf, exactly like the place reserved to the freedom of expression.

The RNST‘s revolted soul is strong in heart. He is showing his colours with proudness. He cautiously asserts his heritage. Humble, he only displays his opinions but shows only one colour.

Sigismond Cassidanius, polymorphic artist. He makes stencils and belongs to a group of collagists. He also writes press releases about other street-artists for their exhibitions and he animates a group on Facebook.His passion for street-art movement grew since the 90’s when, together with his friends, he created the association JONAS. They have been involved in squatting the former Lycée Diderot (Pole-Pi) in 1995 until 1999 and organized festivals of urban arts in Montmartre.
After his bachelor in history of Paris he oriented himself to the working class anthropology and the urban economy. He has been working for 20 years for the city of Paris as a pedagogical responsible. Today he shares his passion for urban artistry through guiding and his support of the Collective 3 Couronnes in Belleville.