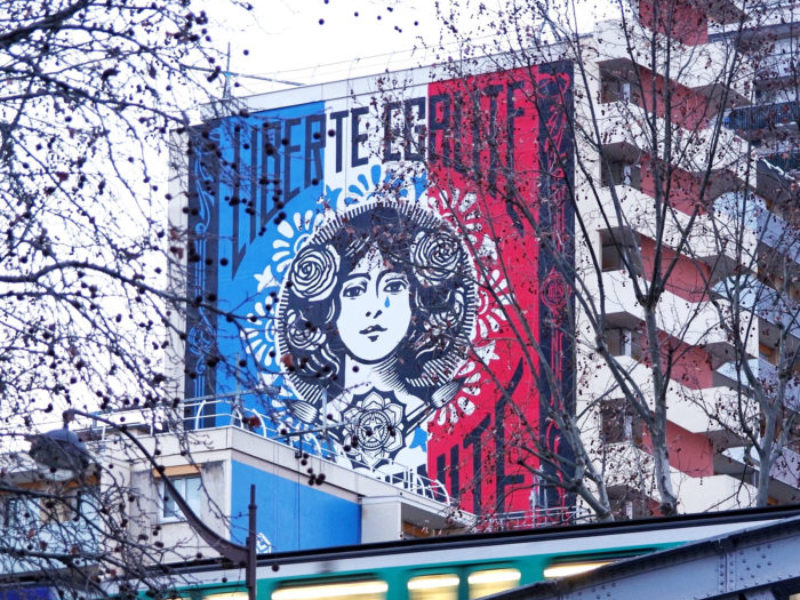 Painted by Shepard Fairey aka Obey back in 2016 it was initially a homage to the victims of terrorist attacks in 2015 in Paris. Liberté, Egalité, Fraternité – the artist wanted to refer to those three values of the French people, as he finds it to be a necessary base in any democratic society.

The woman in the middle of the painting is Marianne – the allegory of the Republic. Interestingly enough, the image itself was inspired by a popular ornament used during la Belle Époque by the printing business, similarly, we now use free clip arts.

On the night of December 13th, a group of vandals modified the mural. The three words of the motto have been crossed out with large jets of white paint, and the red blood teardrops appeared all over Marianne’s face. Hashtag #MariannePleure (Marianne is crying) was added together with a reference to the magazine HIYA, who received the coded message from the authors moments after the event. The mystery crew shared photos documenting their intervention together with the manifesto and later a short video clip, that you can find here.

This hashtag, proposed by the citizen movement Concorde and promoted by HIYA, is a call for artists who feel concerned to create and share works that respond to the way the values of the Republic (freedom, equality, fraternity, but also secularism, the right to the soil, the right of asylum, women rights; to name just a few) are deteriorating day by day in France. The action has already got a huge response in the graffiti and other artist circles. Police violence, hijacking of secularism, inequalities of all kinds… Those are just a few problems they wish to address. Without explicit references to current events, probably to go beyond it, it is clear that it’s a part of the wave of protests, already massive, against the draft laws on “Global Security” (a ban on filming the police) or and on anti-separatism (considered Islamophobic).

The author of the mural quickly reacted to this détournement, expressing his full support for the protesters:

“I side with people who protest injustice, so if that’s what the statement was meant to be, I understand it.

The misconception is that the Liberté, Egalité, Fraternité image was something political that stood for anything other than a belief in the value of human life, human dignity, and a show of support for the people of France after they suffered a terror attack.

I think that the French slogan “liberté, égalité, fraternité” is really beautiful if it is manifested in the positive ways I’d like to see.

Freedom, equality, and fraternity are principles I’m pushing for with my art and activism, which I think should be apparent to anybody who looks at my history of messages of peace and harmony, respect for the planet, and respect for people of all races and backgrounds.

These ideas are what I’m pushing for in my art and what I’d like to see in France, the U.S., and around the world.

If some people feel that that the Liberté, Egalité, Fraternité art piece has been hijacked by people they don’t agree with, then my answer is  – I’m not ready to give it to them, and you shouldn’t be either.”

Yesterday the mural was renewed. The three values remain standing, yet one little detail has been changed. “I added a tear to Marianne’s face. And produced a new limited edition silkscreen print, all the profits from which will go to the poorest people. Actions are more important than words” – expressed Obey in this official statement.

His studio produced 650 prints, half of which were shipped to Paris. They will be available on the Itinerrance Gallery website on February 17 from 7 p.m. (at a price of 90 euros). The other half will be available for sale at Obey’s online store. The profit from the sales will go to Les Restos du Cœur association.

Are you digging the result of this interaction? Let us know what you think in the comments below! 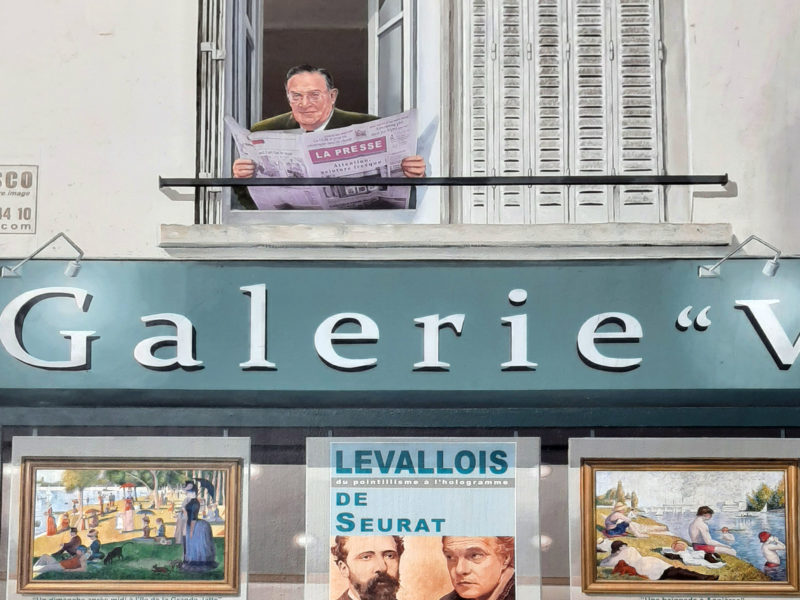 You may know us for our passion for Street Art. Nevertheless, we do love all sorts of creativity and artistic expressions, and love to discover those around Paris.

Since we, the guides, are having a little bit more time to ourselves these days, I decided to explore lesser-known neighbourhoods in search of some cool arts.

This is how I stumbled across Levallois-Perret. It is hard to imagine that this tiny commune is the most densely populated city in Europe, yet it is one of the two most expensive Parisian suburbs. It is the final resting place of Gustave Eiffel, who had his great atelier here, working on his most famous constructions like the Statue of Liberty or Eiffel Tower herself.

The nearby island made its own history when post-impressionist painter Georges Seurat decided to immortalize her in his paintings.

These are only some reasons why you should check this place out… it is also true heaven of trompe l’oeils! You got me; this was a real reason why I decided to explore there!

What is Trompe l’oeil, you ask me?

The history of “deceiving the eye“ by the incredibly realistic style of painting, goes all the way back to Ancient Greece, where Zeuxis famously hung his canvas outside, fooling the birds who mistaken the painted fruits for the real and destroyed the image! His rival Parrhasius wanted to prove he is even greater at this, and so he invited Zeuxis to his studio and asked him to unveil his newest creation. But Zeuxis couldn’t move the cover, as he soon realized it was in fact the painting itself! Parrhasius won this contest, as fooling an actual person was considerably more impressive.

Nonetheless, the name Trompe l’oeil was firstly used and popularized by a French painter Louis-Léopold Boilly, who showed his painting under that title in the Paris salon of 1800.

Today when using this term, we are mostly referring to the murals, painted on a blank wall, to resemble a façade of the building. It often features “fake” windows, balconies, doors, shutters, sometimes flowers on the parapets, animals or even people.

In Levallois-Perret the project to develop trompe l’oeil was incorporated in the 80s. Since then, every year more and more murals are being added. The most popular company is that one managed by Patrick Commcey – A.Fresco. In 2011, he was awarded a Silver Brush for Café des Acteurs – undeniably the most beautiful wall in the entire city.

The municipality has sponsored some murals, and others were incorporated into the real estate projects. The one next to Louise-Michel metro station was included in the renovation budget.

If you wish to join us on a little walk in the area, don’t hesitate to contact us, we will be pleased to create a wonderful itinerary with some complimentary stories.

Have you already visited this place? If you did, please share your thoughts in the comments.