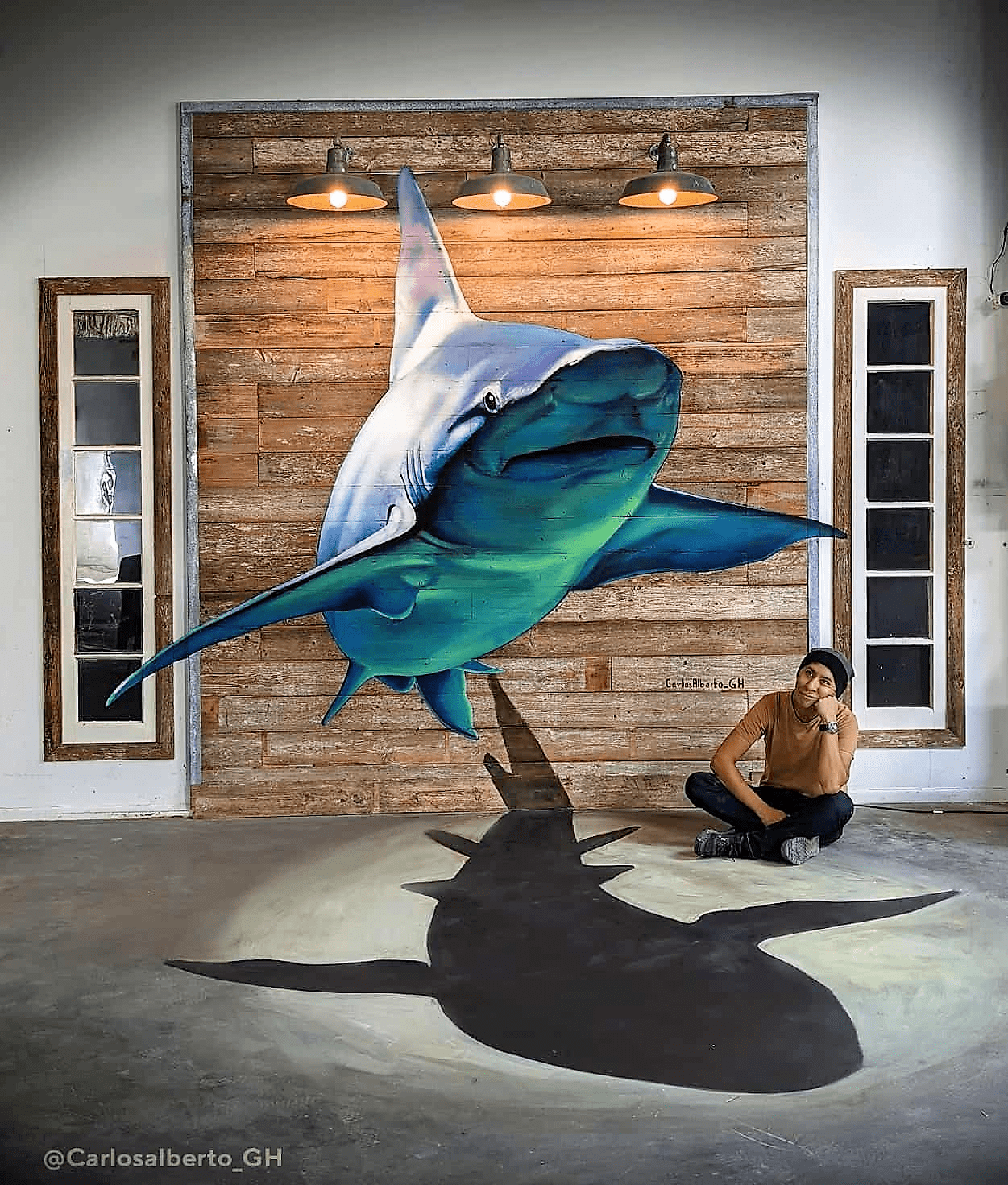 I just understood it was time! That street art is crossed by a powerful internal movement: trompe l’oeil-mania. To give an idea of the phenomenon, let’s take the example of the site www.trompe-l-oeil.info. To date, 12,000 photographs of walls and facades and 79,000 photographs of trompe l’oeil have been found. A fashion that spreads at the speed of the electric waves of the Internet and reaches all continents.

That is a good reason to try to make it clear. First, it is necessary to agree on the words. Trompe l’oeil, 3 D, optical illusions have this in common that the viewer thinks he sees what is not. In this, he is the victim of an illusion. His gaze, he believes, was deceived. The term “optical illusions” refers to a scientific approach to the phenomenon and “illusions” emerge from physics. On the other hand, 3 D and “trompe l’oeil” refer more generally to the world of the arts (sculpture, architecture, painting, photography, etc.). It is a process aimed at creating, through various artifices, the illusion of reality (relief, matter, perspective), a technique of painting, for what we are dealing with today, which consists in representing an object of the absent reality by making us believe that it is there.

It would be exciting to tell the story of the trompe l’oeil in painting. Some see the essence of painting: to make a real absent or imaginary present by graphic traces. Only the break of painting from with representation at the beginning of the twentieth century, introduced in this continuum, a gap. What interests me much more is to understand why today in contemporary urban art we see a resurgence of a process as old as the world.

Let’s focus on the phenomenon itself. A viewer is deceived by an artist, and he is glad to have been deceived! Put another way, the viewer has fun being fooled!

One of the conditions of illusion is the mastery of “artifices”. Kind of like the magician. Like them, painters must make “artifices” invisible. What are these “artifices”? First, perspective. It gives the impression that the surface becomes volume. That the two dimensions of the medium, in fact, reflect a third. The various perspectives are taught in art schools and here too, the history of their invention is rich in teaching. Our eye of the 21st-century viewer is not that of the viewer of the “Very Rich Hours of the Duke of Berry”, without other forms of trial, without any analysis we “see” in a painted representation volume and depth. Unconscious heirs of the conventions and codes of Western pictorial representation, we have integrated them to such an extent that we no longer “see” them and that it takes an effort to analyze the works to give them to see.

Unconsciously, we give a third dimension to realistic representations. In the immediacy of a look we “see” objects close and others more distant when there are no objects on the surface of the canvas. We also admit, among other things, that a character partially hidden by another “exists” in its entirety. In fact, our culture has created routines that connect the eye to intelligence by bracketing, rendering unconscious, perceptual mechanisms, artifices of the painter and the procedures of cognition. In this meaning, we can argue that our western culture, in this case, has changed our perception of works. To be convinced, you only have to look at works belonging to other cultures. Our ignorance of the codes of representation changes our view of these works. Other artifices reinforce the first; representation of shadows, choice of colours, etc. In fact, it is the sum of the artifices that create the illusion.

A question that is central to the thinking on the trompe l’oeil, namely how to explain the durability of the trompe l’oeil? The answer is certainly simpler than the question! Pleasure, simply, pleasure. That of being deceived.

In retrospect, in the realization of having been deceived lies the taste of mystery. All in all, the viewer confesses that his intelligence was deceived, but he does not understand how he was deceived. This misunderstanding verges on the shores of magical thought. The pleasure I feel comes from this vertigo. So, when I applaud the magician who succeeded his trick, I “congratulate” him for “having me deceived”, I applaud his mastery of the artifices.

I think the same is true of painting. I like to rub shoulders with the mystery of my deluded senses.