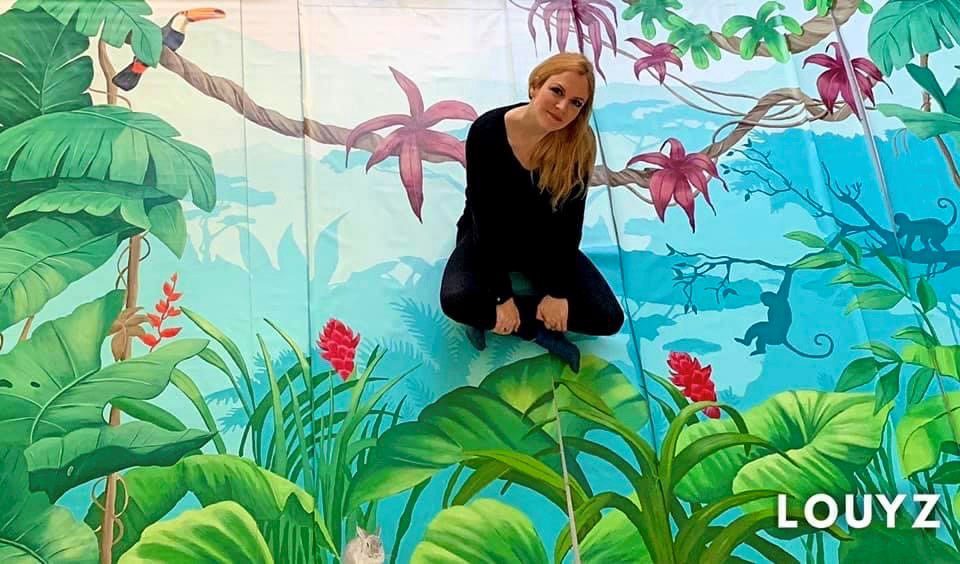 Her brushes run underneath the rooftops, twirl in the frame; overflow it, go up along the crevice, from there extend and unfold on the wall for a new jungle to emerge. The artist gives them free rein and they leave her mark, that of LOUYZ.

The landscape of the city suddenly appears as a grey-blue-horizon, a backdrop, to highlight the burst of color of the vegetation and the animal scene, which is played out on the wall, through optical illusion. Sometimes it’s a macaw taking flight (le 27 Pantin), or a languid tiger (Italie2) or even a hummingbird gathering pollen from a lilac flower (le jardin de l’art urbain aux Lilas). The urban jungle is opening up to “de-landscapes” and new perspectives on the shadows of the cavern of our pseudo-reality. Our impressions are misleading, essentially consumerist, while at the heart is the quest for truth…

This trompe-l’oeil technique is the artist’s trademark. Or rather, her originality comes from the use that she makes of it, mixed with the practice of Street-Art, to open a bridge, a breach, a crossroads in the city. A window to our aspirations of nature, for us, the city dwellers, so denatured. Nonetheless, her subjects and the way they smooth the blind gables of our blind streets, show another reality; the poet said: there is nothing truer than what is imaginary in another world”. LOUYZ exemplifies this perfectly… 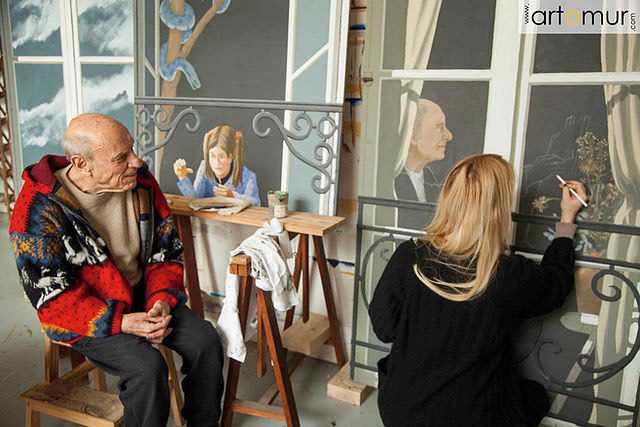 Fabio and his granddaughter Louyz

LOUYZ comes from the tradition of muralism, her grandfather was a painter who wowed the public with his trompe-l’oeil works, especially the monumental staircase at the Étienne Marcel station and the windows of Beaubourg, rue Quincampoix.

Fabio Rieti was an obsessed artist, passionate about music and poetry, a vibrant soul in the concert of creation. As proof, he painted a tribute to Jean-Sébastien Bach at the corner of the eponymous street in Paris 13th, the wall that celebrates the culmination of the three generations, since it was painted by the master in 1980 and restored by his daughter and granddaughter in 2016.
He began his career by collaborating with the architect Émile Aillaud, which lasted fifteen years, with whom he covered with mosaic the facade of large ensembles such as Grigny, Courbevoie, Chanteloup or Bobigny. The big cloud towers in Nanterre, they’re by him too! However, he turned to figuration and realized «Les fenêtres» (English: “The windows”) his first mural painting in 1975.

Italian-born in 1925, he left the country with his family because of the laws of the fascist state, first for Paris, then the United States. There, he was introduced to the art of mosaic, which would later lead him to mural painting. He came with his suitcases to Paris at the age of thirty-one. The fresco at the metro station speaks of this period, this man who carries the suitcases of exile, it is he who goes up the slope to find his daughter who is raising her arms to him. The musicians of the orchestra are a reference to Bach’s music recorded by Glenn Gould and Yehudi Menuhin and to his father, a composer.

He died in October 2020. He is a pioneer in his art, recognized as such by his peers. He passed it on to his daughter Leonor, who carried and supported it. She raised her own daughter, Louise, with this knowledge, almost this belief. LOUYZ created the “Artomur” structure to bring together their three brushes and is therefore atavistically situated at this intersection.

To be at the crossroads means to be visible, it is a way of appearing “On the corner”, like the album of Miles Davis whose new sound came out of the trumpet; LOUYZ comes out of the wall, at the intersection of the technique of muralism and the programmed invasion of Street-Art, with this way that belongs only to her, to delight our walls with real presences, I quote:

– “It is the everyday that is profound. That’s our reason for being, of the unexpected, perhaps involuntary encounter with the man or the woman whose love will change our universe, encounter – Baudelaire knows it – at the corner of a street or through the reflection of a window. It is a mystery that is so terribly concrete.”

The emergence of a mysterious scene is therefore terribly concrete for our species and the encounter with one of the animals from the colorful bestiary of LOUYZ can prove to be rich in meaning, especially since it has become a rare thing in the contemporary world, too busy hunting them!

Thus appearing in the festivals in Sologne, Le Mans, Pantin, Paris; a crowd of different species, like a kingfisher or macaws and the emblematic lizard. It comes perhaps from the initial proposal of Fabio Rieti, who had planned to draw a lizard on the cube of the Halles, before one of her friends, in favor of the darkness in the workshop, sees a man walking on the wall? The lizard will become “Le piéton des Halles”…

Is there a plural to trompe-l’oeil, and no, we don’t say trompe-z’yeux! This singularity of the Muralist artist is found even in language, and, to it, adds his personality and his own sensitivity to make us travel in space and time, a place outside of Darwinism and the classifications of Linné, a time to situate oneself in the jungle of cities, to reorient oneself.

June 2021 by LOUYZ in Marcilly-en-Gault, for  Biennale d’Art Contemporain in Sologne 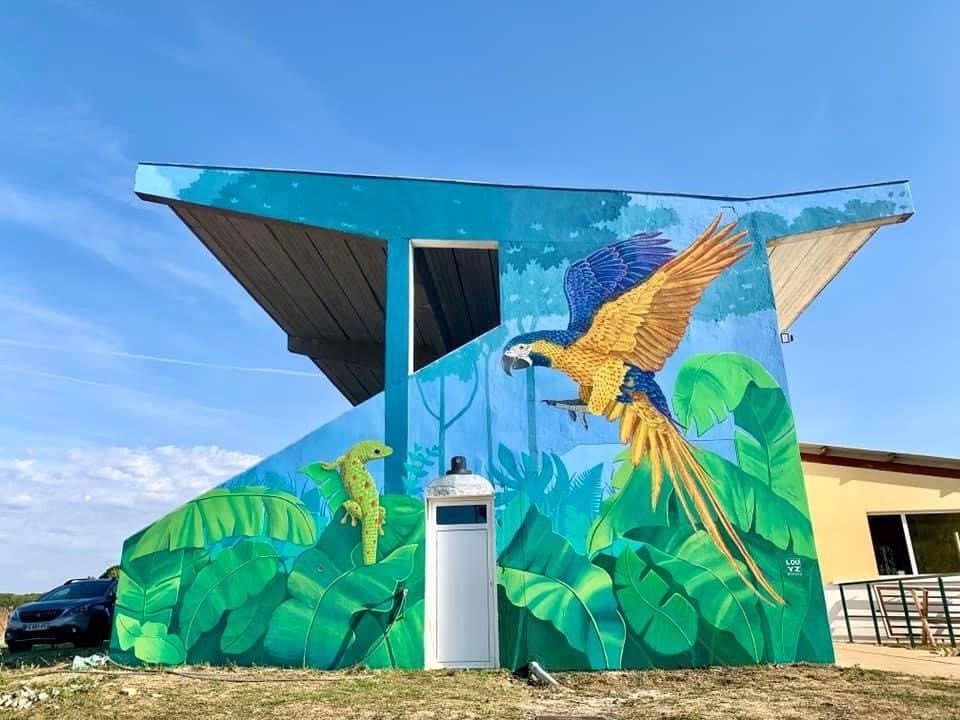 Made by LOUYZ in Dreux with Ace Paintball in August 2020 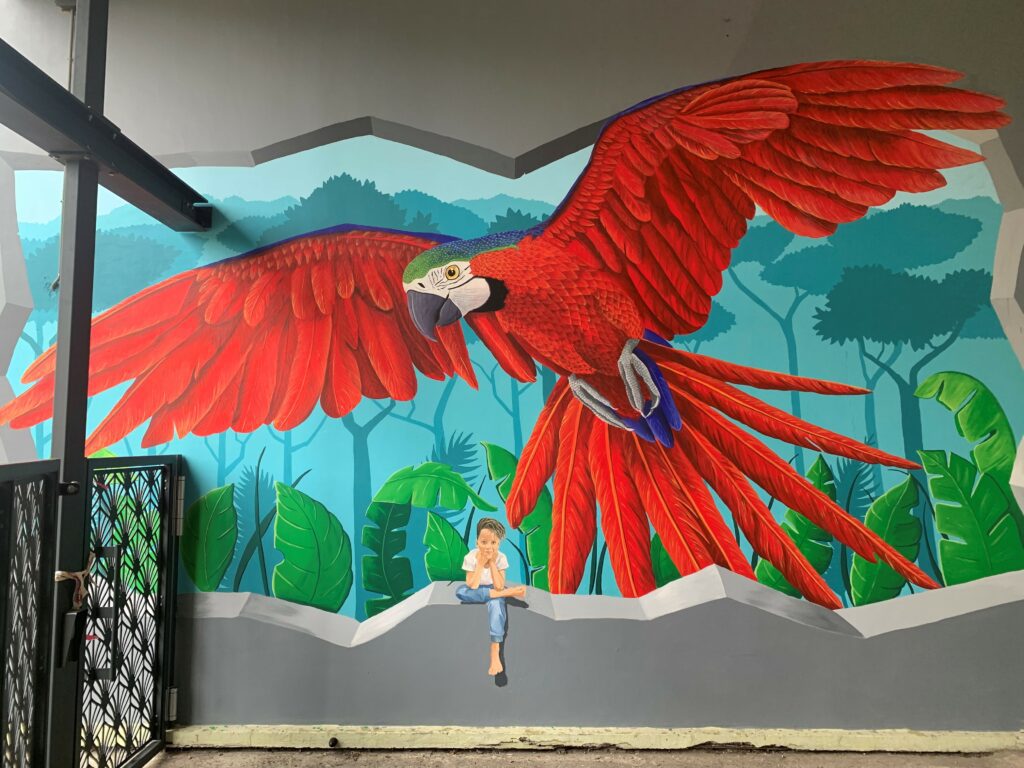 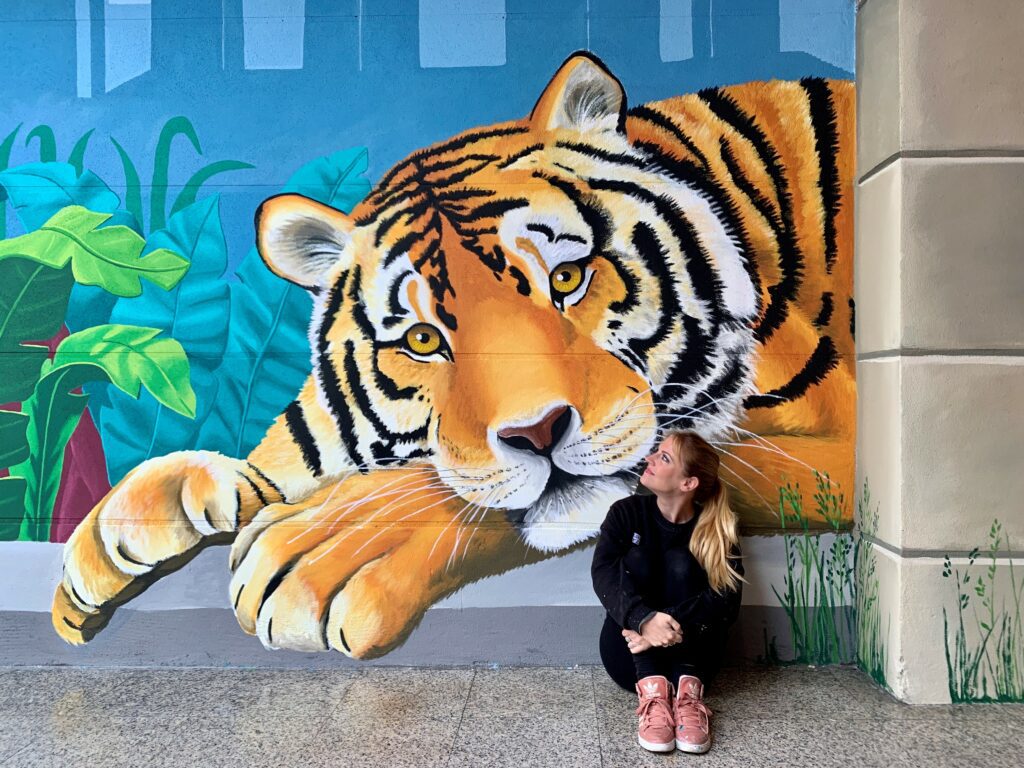 We can see it at the entrance of the mall  Centre commercial Italie2, mady by Louyz in  September 2021