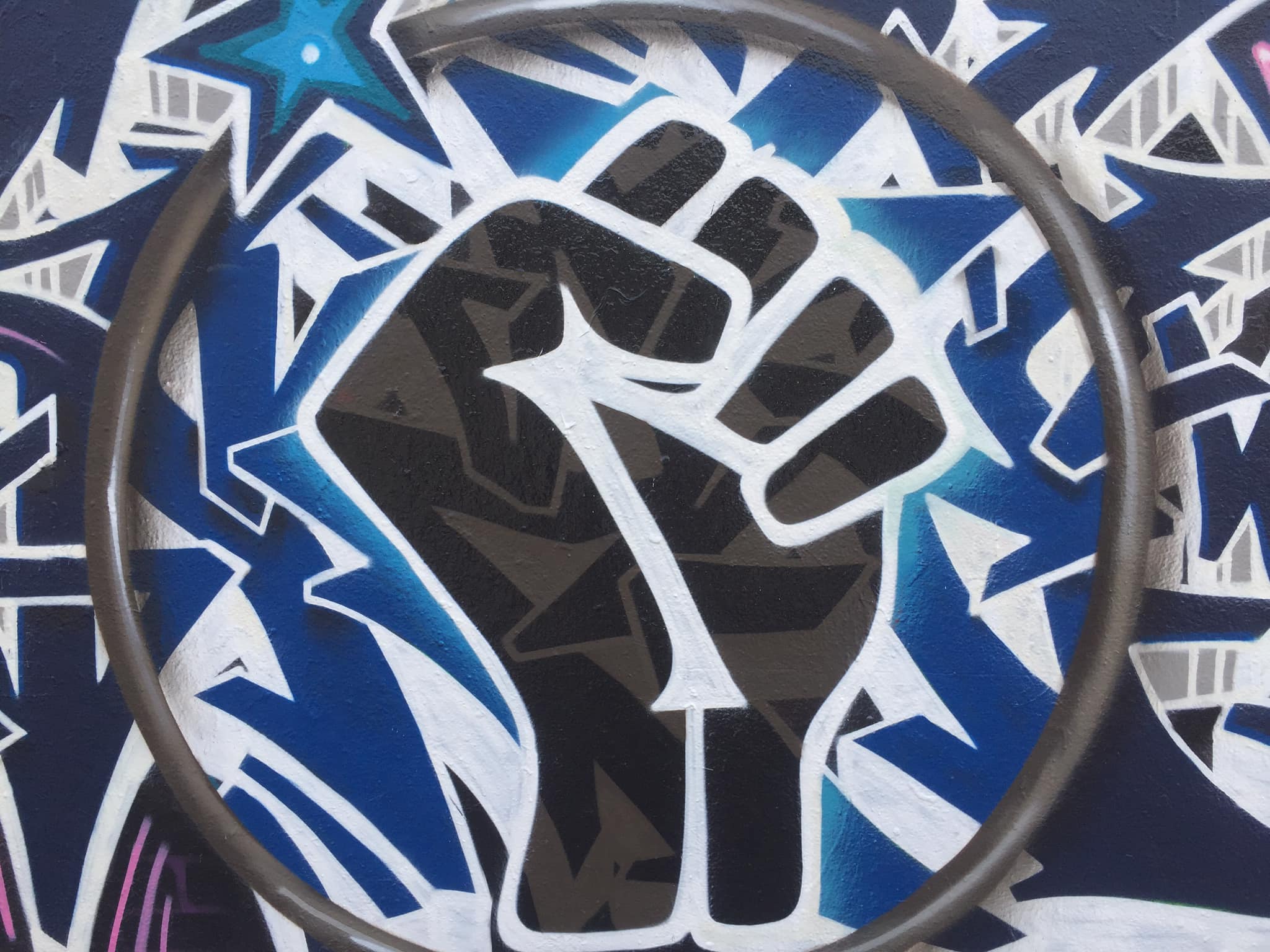 From the first weekend, after George Floyd was murdered, artists from around the world started to create work to celebrate his memory. Through social networks, I saw work by Eme Freethinker in Berlin, or the portrait of George Floyd at the very place where he died in Minneapolis, with flowers and candles around it. In France, after the similar case of Adama Traoré – Malian French man who died in custody after being restrained and apprehended by police, and other examples of police violence, the disagreement for racist behaviour have risen.

The artists from Saint-Denis, the historic capital of the Seine-Saint-Denis, did not take long to invest themselves in the case. On the official WALL (le Mur 93) a fresco was created. The mural illustrates the last words of George Floyd in giant letters. Right away, the link is made between Adama Traoré, Zyad and Bouna (whose deaths had provoked the uprising of the Northeast suburbs of Paris in 2006), Steve (June 2019) to make the message stronger.

The paradox of life in the city: easy only for those who can afford it and limit for those who can’t. Culture and leisure, social and economic privileges, access to better education and better businesses… This disproportion creates forced inequality from the very start.

The artists of the 93 were thus faithful to their values and reacted quickly because they are concerned. They grew up in the neighbourhoods in France where spontaneous solidarity is established between the inhabitants, they work to improve their lives with courage rather than to improve daily life through dealing drugs.

The outstretched fist of the two American athletes at the 1968 Olympic Games in Mexico City, gloved as if to underline the protesting feature of their gesture, the courage it took Thommie Smith and John Carlos! It is the heritage of the civil rights that occupy the front of the protest in the United States, with the criticism of the intervention in Vietnam. This fist raised, it is, therefore, a place of memory and a founding gesture, by drawing it today, it’s a reminder of the continuum of struggles for justice. An old revolt and resistance still exist. It became, of course, the symbol of Black Power in the 1970s, and later was used in the cultural production for movements like «Blaxploitation», or the «Free Jazz», or the literature of Toni Morrison. This continuity and the strength of the gesture provokes respect and feeling of solidarity. And naturally, it makes this revolt more meaningful.

The history of segregation is also strongly evoked by this fresco featuring the policeman wearing the Klan hood, pointing the gun at the head of the black man kneeling in front of him, who hands him skittles.

The flag of the Confederate States of America accentuates the violence. It marks the difference between whites and blacks. Whites as the population represented by NAR and the gallant Southern slave mentality that Billie Holiday sang about in «Strange Fruit» during the civil rights movement. Like the policeman who killed George Floyd it characterizes racism. The reaction of black people is disproportional to this brutality. The kid from the picture is not armed to fight, instead of the gun, he hands the bag of sweet treats… (the reference to Trayvon Martin, 17, who was shot dead by Neighbourhood Watch leader is a primarily white, gated neighbourhood in 2012)

The Eyes of Adama Traoré and George Floyd are in the same photo and therefore in the same fight. JR claims he wants to set us on a course of reflection, but he does not want to impose. It is up to us to keep the rest of the speech, it is less dogmatic than problematic. He asks a question and it is up to us to answer it. Here we are challenged by the unity, the stare of the eyes that we can’t turn back on. We are all witnesses of the violence against the two martyrs. The spray strokes executed by Zenith are a replica of the cracks on the ground where Floyd agonized.

To celebrate the memory of George Floyd, the architect Ardif creates a Gas Plant, emphasizing that there is no way out, except for a fatal one.

In the video where he appears, theatrical and deferential, the African artist (clothing designer and painter) conquers us by the interesting performance where he applies paint on canvas with his hat. There is a lot of irony in his work. He gives us a brilliant and vibrant example of both virtuosity and sincerity. I know Dakar is not Paris, but there are bridges between Paris and Africa, which connect us and I thought that via social networks, I could count this artist in the Parisian landscape.